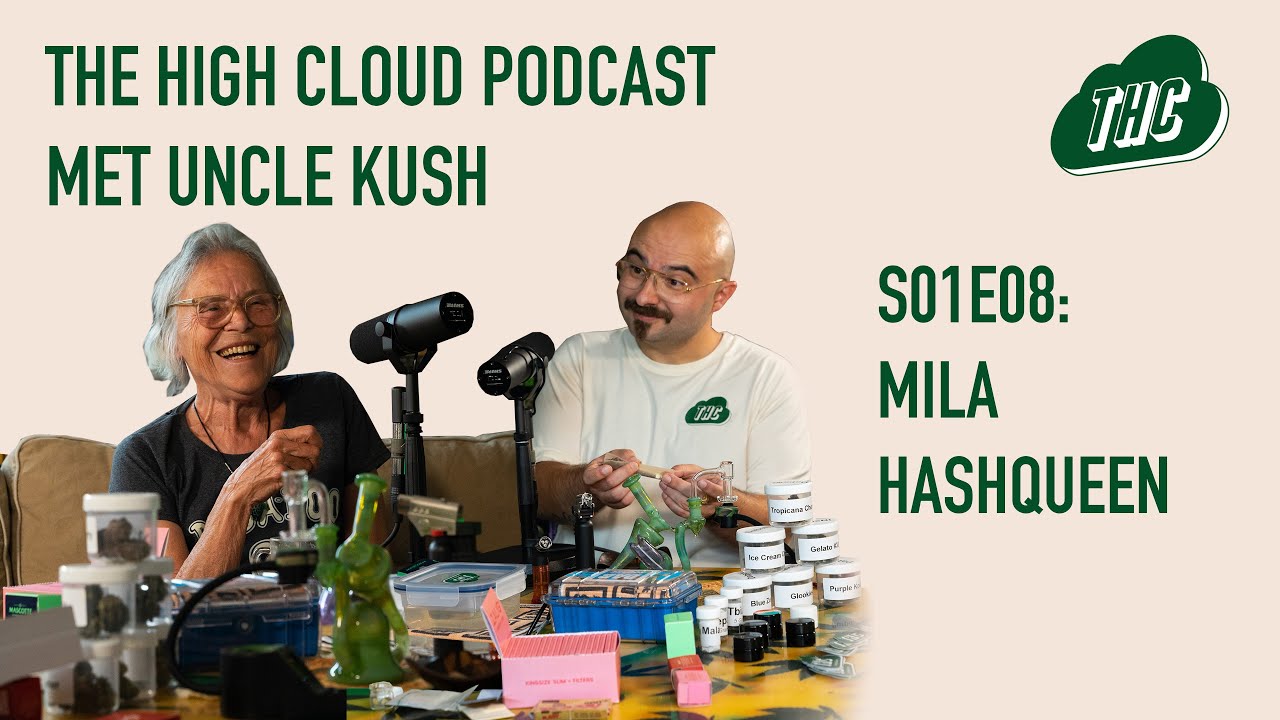 In the eighth episode of The High Cloud podcast, Uncle Kush gets a warm welcome from Mila Jansen. Who was nicknamed the “HashQueen” thanks to her legendary invention. We hear all about Mila’s journey of discovery into the world of cannabis through stories from the past and present. But we also discuss her impressive hash museum and dab-a-doo events; and hear the future plans of this unstoppable centipede:

Mila the ‘Hashqueen’ Jansen is a living legend; who has proved to be an important link in the development of the global cannabis industry over the past 50-60 years. She was one of the first to make cuttings from cannabis plants in the Netherlands. This saved the Dutch growers a lot of time and money, since they no longer had any males in their tents and were guaranteed to use good genetics.

Mila’s real achievement, however, is the invention of the Pollinator; a kind of automatic sieve with which you can make good hash at home (or on a larger scale) with childlike ease. Of course in this special episode of The High Cloud podcast we also talk about this machine and its successors: the Bubbleator (for water hash) and Ice-o-latorfor ice hash. She built a successful business with these machines – the Pollinator Company – which to this day handcrafts these machines and ships them around the world.

Even before her great success in the Netherlands, Mila traveled with her daughter (hitchhiking) to India where she lived for many years. Even though she wasn’t there for the hash, she learned a lot from this trip. She saw the unique way they made hash in India and Afghanistan and smoked it there fresh from the plant. As you might expect, Mila is bursting with wonderful stories about this era in her life. As a result, she wrote a fascinating book about this, which you can order HERE.

In addition, Mila the Hashqueen talks about the special time she had as operator of the ‘Hemp Hotel’ in Amsterdam. Where she didn’t make a cent in profit, but managed to create a safe haven for smoking travelers and made friends from all over the world.

She now meets those friends (plus lots of new ones) regularly at her own “Dab A Doo” events. A hash cup for and by hashmakers that after a series of successful editions, is now going on a tour of South America. Obviously we discuss this daring adventure with Mila in this episode – amond many other interesting topics. Including her impressive hash museum with over 120 samples of hash from all over the world!

Watch the new episode of The High Cloud Podcast with Mila Jansen NOW! Click on the image below, log in to YouTube and have fun watching:

In The High Cloud Podcast, Uncle Kush gives an insight into the Dutch cannabis industry. He does this through interesting stories and conversations with friends and entrepreneurs in the industry. In the first episode he spoke to entrepreneurs Jack and Tom and in the second show dab-masters Runa and Kees. The third episode is with Rinus ‘the Robin Hood of Cannabis’ Beintema and the fourth is a Q&A with Uncle Kush himself. Episode five is an interesting tasting with ‘interpener’ Herbert M. Green and in episode six Uncle Kush is the guest of the guys from CNNBS.nl. In the seventh podcast, the one before the one with Mila, Uncle Kush sits down with Mahmoud of Dutch Passion. Have you seen them all? Check them out now!