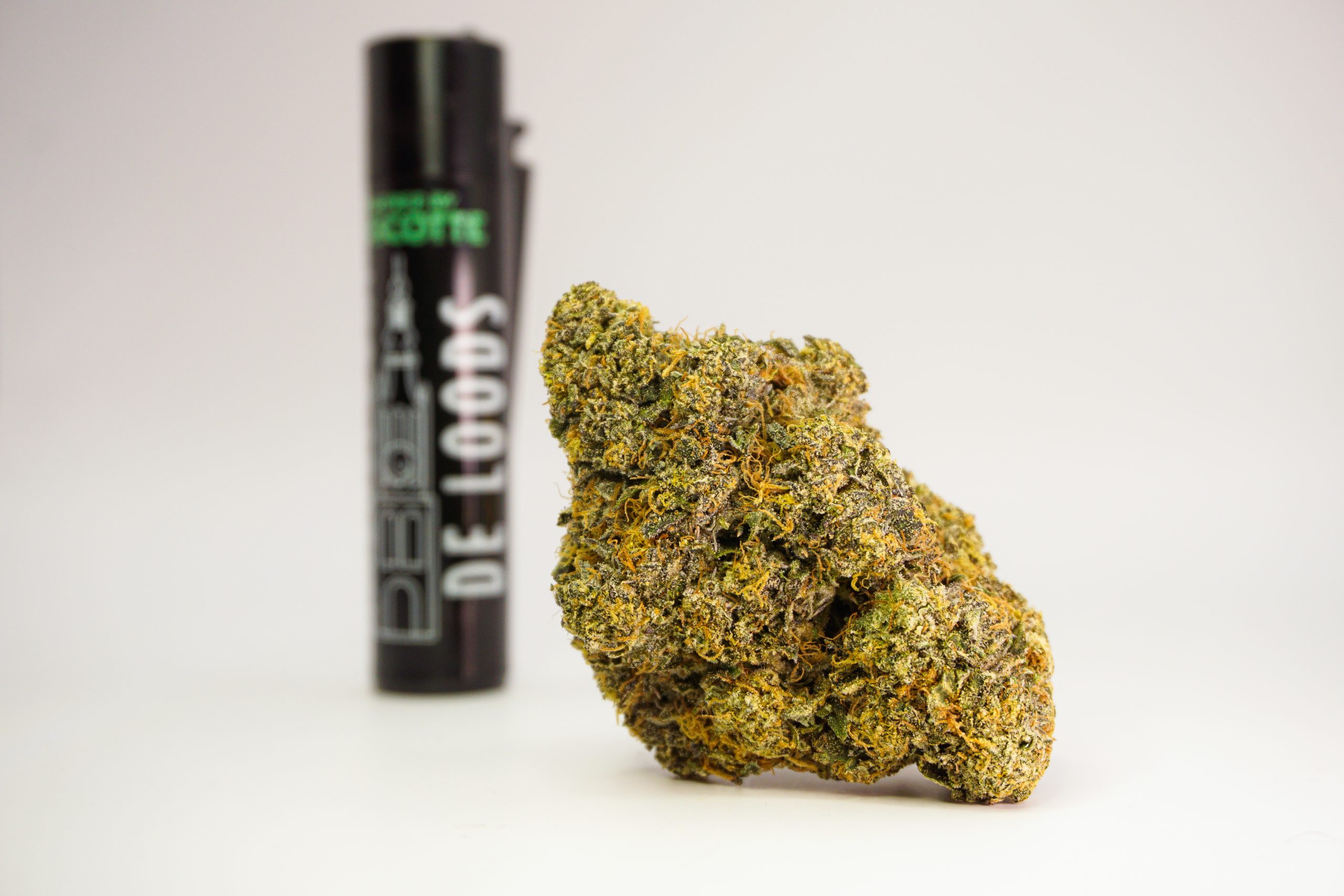 Rainbow Sherbert, or RS11, is a hugely popular strain brought over from the United States. Yet this one comes from a coffeeshop in the central Netherlands: De Loods in Amersfoort. Is this colorful cultivar as good as the hype suggests? Uncle Kush figures it out for you, in The High Cloud Strain Review of RS11 from Coffeeshop De Loods:

RS11, RS-11, Rainbow Sherbert or Rainbow Sherbert #11 is a wildly popular cannabis strain from North America. Originally crossed by Doja Pak and according to him originated from Pink Guava and OZK. Those two parents make this exotic creation particularly complex in taste and effect; but also beautiful to look at.

There are different phenos of this strain with various external characteristics. Most exhibit a light green color with yellow tones; although some are darker green with some purple tones. Like this one from coffeeshop De Loods in Amersfoort. A nice solid bud that appears to be perfectly cured. This is noticeable by the stickiness of the bud, combined with the way the stem breaks when you bend it.

A test with Delta9Analytics’ Purpl Pro confirms this, as the humidity within the flower comes out at a near ideal 9.4%. Moreover, according to the test, this RS11 from De Loods has a THC percentage of 21%. This also happens to be exactly the average Leafly indicates for this allrounder. So far, so good…

In taste and effect, RS11 from De Loods in Amersfoort also definitely does not disappoint. Indeed, it is surprisingly delicious. The distinctive fresh, layered sweet flavor is followed by an almost pungent spice on the tongue, making this strain’s aroma difficult to pinpoint. Although there are distinct notes of citrus, fresh fruit and a gassy aftertaste.

This strain is a real treat to smoke and also burns away well with relatively white ash. So even for the more discerning cannaseurs, it is well worth traveling to Coffeeshop De Loods for this strain. Such a nice strain that Uncle Kush prefers to smoke it pure. While he often mixes other strains together for a more comprehensive terpene profile – thus more flavor and effect.

That effect, by the way, is not to be trifled with in Rainbow Sherbert, which apparentely has decent THC percentages of its own. Add to that a particularly extensive terpene profile – with the relaxing Myrcene as the dominant terpene – and you’re left with a versatile strain. Because in lower doses you have an uplifting, happy and smiley effect. But the relaxation quickly takes over when you consume more of it. Overall, it is an analgesic, uplifting strain with a relaxing effect at higher doses.

Coffeeshop De Loods has long been an established coffeeshop in Amersfoort. Thanks to its strategic location in an industrial park, the store is easily accessible. But at the moment, a serious remodelling is underway, fitting their re-branding. There, the shop is working to create a chic, high-class look befitting Amsterdam Genetics. The luxury cannabis lifestyle brand the shop is associated with today. Of course, they remain in business as usual, so don’t hesitate to stop by!

ℹ️ This information is for educational purposes only. We do not sell any of the items shown and do not tolerate requests for them 🚫