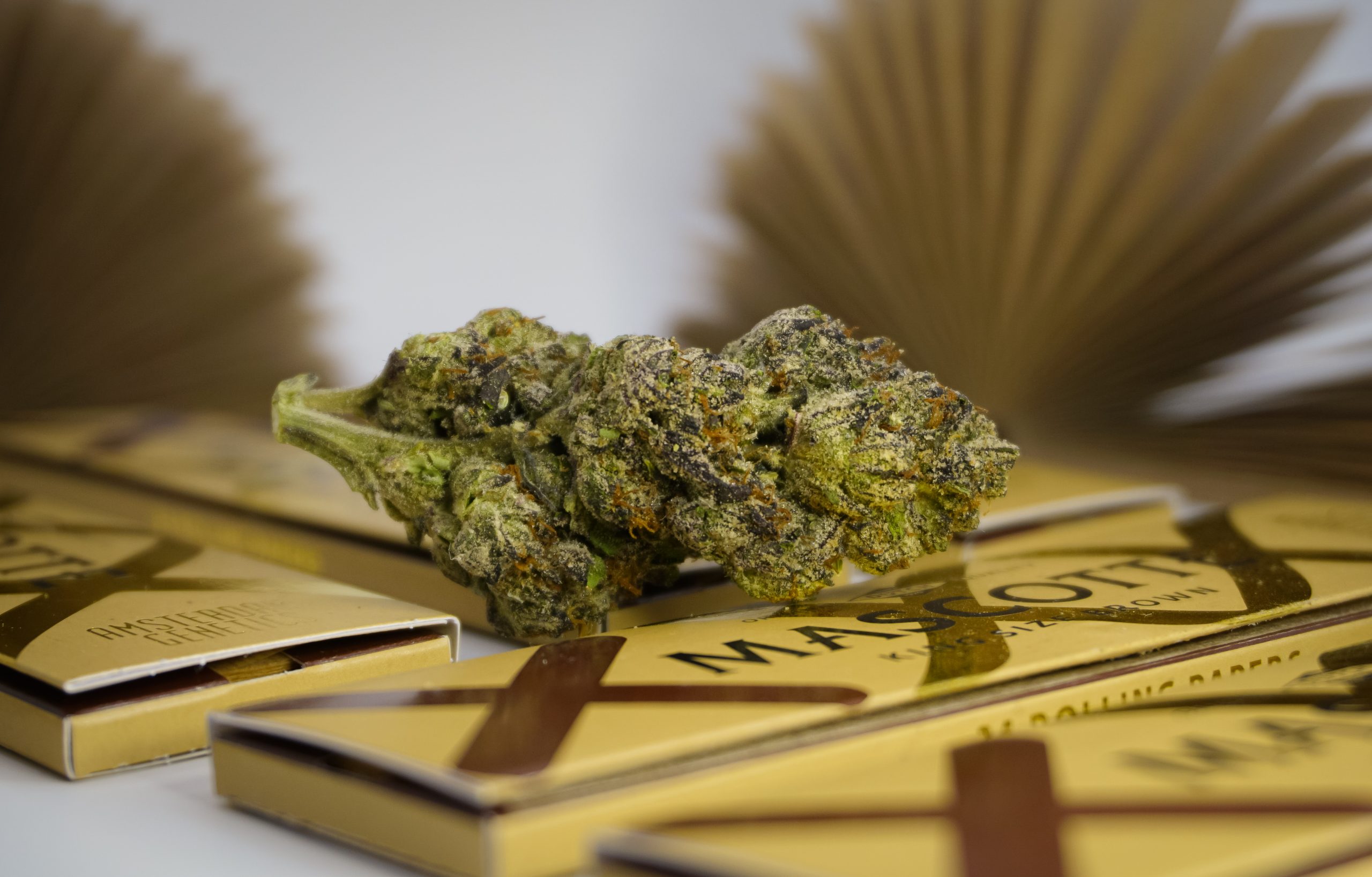 Sometimes you come across a strain in the shop that makes you stop and think. After all, it’s not just haze and overpriced Cali on the menu. Sometimes there is just a friendly-priced, rare cannabis strain on the shelves. And when that happens, The High Cloud is right there for a Strain Review. Like with this Double Mochi from Coffeeshop de Loods in Amersfoort:

Double Mochi is a fairly rare strain bred by ‘Sherbinki’s’ in San Francisco. Although this one comes from the Loods in Amersfoort. This strain is a cross between the minty, doughy Girl Scout Cookies with the fruity and creamy notes of Sunset Sherbert.

Since both parents are very colorful, it’s no surprise that Double Mochi comes out looking topshelf in terms of appearance itself. With predominant deep purple tones, green accents and dark flowering hairs. De Loods’ amazingly firm buds show good bud structure. Because of this, we dare to assume that this strain is not stiffened with “weed viagra” or, PGRs. You can still clearly see the different calyxes, which are also covered with a healthy layer of snow-white trichomes.

Thanks to the flavorful genetics of its parents, Double Mochi has also become a delicious strain. With an almost perfume-like apple sorbet flavor. Fresh, sweet and doughy; with a spicy and almost cinnamon-like undertone. To best analyze the complex aroma of this Double Mochi, we used a vaporizer for this review. This is because the weed just doesn’t burn quite smooth enough to smoke an entire pure joint.

Consequently, the white ash which many smokers use to judge the quality of their weed, is less present than hoped. Possibly a few weeks of curing is the solution. But this bud isn’t going to last that long here. Because, as mentioned, it’s delicious in the vaporizer; and it won’t bother you if you smoke with tobacco (or substitutes) either.

The fact that generally only small bits at a time are consumed in a – portable – vaporizer is perhaps a good thing with this strain. Because the effect is definitely not for beginners. Double Mochi is a hybrid itself, but very quickly produces a couch-lock effect thanks to the dominance of the terpene ‘myrcene’.

Therefore, after vaping, you will quickly feel a relaxing sensation in the body, while adding an intense head high fast after that. Where most imported weed has more taste than effect, with this strain from Coffeeshop de Loods you’d rather think the opposite. We found this Double Mochi on the menu at Coffeeshop De Loods in Amersfoort for only 12.50! In our opinion, this is a perfect bang for your buck!

Coffeeshop De Loods has been around for some time but is now in the process of a serious re-branding. They are easily accessible thanks to their strategic location in an industrial park; where they will soon begin to remodel. There they are working on a fancy, high-class look fitting Amsterdam Genetics. The luxury cannabis lifestyle brand the shop is associated with today.

ℹ️ This information is for educational purposes only. We do not sell any of the items shown and do not tolerate requests for them 🚫